Showing posts from January, 2009
Show all

By CentreStack - January 28, 2009
Developers, developers, developers! I still remember this Steve Ballmer video . Even companies as big as Microsoft need more developers. It is so easy to create a cloud storage nowadays. Sign up for an Amazon S3 account, download a .NET library or a PHP library, you are on your way to a weekend project to kick start your cloud storage offering. It is a crowded space. Many services are competing at the capacity level, such as 50G - 25G for free. Not many users still look at 2G free offering. This is a no win competition and will drive the margin thin. To win, it has to come down to the killer apps and the services on top of the storage. For example, if you have Gmail, you were locked into the service and the storage. Whoever offers the best apps stays. Whoever gets the most developers to write apps wins. We are one of the developers, delivering cloud services to user's desktop. We released the Gladinet Cloud Desktop , build 71 to the web today. It was not easy and we are mov
14 comments
Read more 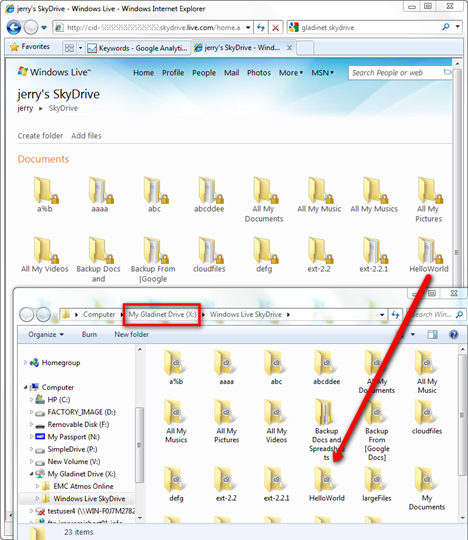 Build 60 was released to the Gladinet download page today, which completed a two-part effort (build 48/build 60) of integrating the new SkyDrive into Windows Explorer for beta 1. SkyDrive is really cool, especially with 25G and features like publishing and sharing with friends. Currently there is no Windows Explorer integration from Microsoft so it is hard to migrate multi-gigabytes of content to SkyDrive. We like SkyDrive and we would like to help promoting the usage of it. We went ahead and did the value-add. With Gladinet Cloud Desktop, beta build 60, you can do these things: (1) Drag and drop multiple folders into SkyDrive. (2) Grab a link in IE or Firefox and drop it directly into SkyDrive's Favorite folder. You can grab a folder full of bookmarks into the Favorite folder too. (3) Go to a different PC, drag a folder out of SkyDrive and back it up to that PC. (4) Support both Private folders and Public folders. Build 60 is a SkyDrive/Amazon S3 focused release.
14 comments
Read more
More posts