Cloud Storage Services were relatively unknown until Amazon mass produced the now well-known S3 (Simple Storage Service). S3 may not be the first cloud storage service but it is among the first for the public with billions of objects stored. Now we are seeing other cloud storage vendors coming out, such as Nirvanix, Windows Azure, EMC Atmos Online/AT&T, Parascale, Box.net and etc. Google has long been in the cloud services business with the GMail service, the Google Apps Engine, the Picasa photo service and etc, with Google storage backing them up.

A common theme of cloud storage services is that they all provide some API (Application Programming Interface) over HTTP. If the Cloud Storage were to be as popular today as the FTP for the past decade, it needs to have a desktop client that delivers the remote storage to the user's desktop, preferably as a Virtual Network Drive. After all, nobody wants to code a Ruby & Rail or .NET application just to get some simple transfer done.

New Challenges - So Many Different APIs

It wasn't like FTP when all the FTP Servers in the world talking the same FTP Protocol. Since the Cloud Storage Services are so new, each vendor pretty much defines its own API. A common protocol might appear in the future such as the Simple Cloud API effort. However, the state of the art is that every vendor is divided so to deliver a quicker to market solution. As a result, every cloud storage service has a different API.

Basically, the Cloud Storage APIs can be categorized into several groups.

Parascale, Box.Net and other vendors

Cloud Vendors' Approach To the APIs

Gladinet's effort is to combine all these different cloud storage services and bind them to the Windows Operating System. The end result is a ubiquitous client that turns the Windows Explorer into a Storage Portal. There is a virtual network drive with a drive letter. All the supported cloud storage services are mountable within this network drive. (You can find more details of the functionality in the reference) 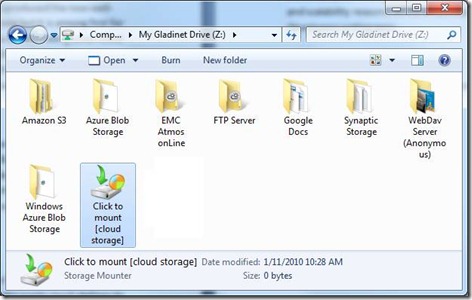 The speed of the internet determines the use case. For example, if everyone were still using Dial-Up network, nobody is talking about cloud storage.

Broadband is the norm nowadays, with speed varies around 100KB/S - 800KB/s. A response time of < 5s is required for good usability for direct access. This means direct random access to the cloud files with 500K-4M in size will be very usable. As a simple experiment, a directory listing of the My Documents folder on my PC reveals 237 Files with 46M Bytes total. I have on average 200KB per file for the files that I used the most often.

At current broadband speed (slower than the 802.11B wireless network), a bigger use case is online backup, which is write once and seldom read. At this stage, the cloud storage can't replace either the network attached storage or the local hard drive because of the speed but it is perfect for backing up stuff.

An interesting twist is to combine the Use Case I and Use Case II by moving the access point from user's desktop to a file server. Users can do direct random access on a network server while the network server is backed up by online storage. As a second product coming out of Gladinet, the Cloud Gateway fits this use case.

1. Manage Azure With Ease - An overview of basic functionalities using Azure as an example