CentreStack now offers an upgraded iOS client that can automatically backup photos and videos from company-owned iPhones and iPads to a company-controlled file server or fully encrypted private cloud. This allows enterprises to maintain complete control of sensitive photos and videos by replicating them to corporately owned file servers. Or, if enterprises replicate the data to a private cloud, control is preserved by maintaining control of the private keys used for encryption, thereby preventing third party access.
Consumer oriented media backup solutions such as iCloud and Google Photo usually fail to meet these requirements by forcing enterprises to store corporate data on third party servers. Though convenient, this may not serve an organization’s best interests if iOS devices capture sensitive recordings, photos, plans and schematics that should remain private. Even in less sensitive situations—like an architect using an iPad to take pictures of buildings, real estate agents taking pictures of houses, or marketing personnel creating a company wide photo library—businesses may often prefer a media backup that sends pictures and videos directly from company owned iOS devices to private, company owned file servers instead of an individual's iCloud backup stored on Apple’s servers. 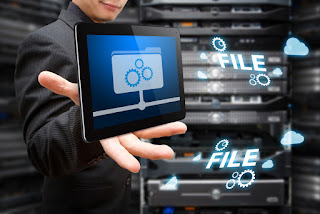 Furthermore, when consumer grade services store data in the cloud, they usually have to access private encryption keys. For example, a recent Reuter’s exclusive exposed Apple’s access to its customers’ private encryption keys, allowing them to access any iCloud backups. And while we’re certainly not suggesting nefarious intent, many companies would prefer to store iOS backups on corporate servers for privacy or compliance reasons. More urgently, their desire to avoid the increased risk of attacks from hackers tempted by the enormous amounts of customer data that the encryption keys stored by Apple provide access to.
For more information about the feature, please visit:How to Backup Your iPhone Photos and Videos