Test Drive Your Own OpenStack Swift With Gladinet

You are a system administrator and you were assigned a task to setup your own OpenStack Swift instance in your own datacenter. You have followed all the OpenStack Swift documentation and at the end it is up and running.

For this, we recommend using the Gladinet Cloud Team Edition account, since it has the most functionalities you wish to see.

How Gladinet Connects to Rackspace

First Rackspace Cloud Files has a well known end point such as https://auth.api.rackspacecloud.com/v1.0. Every OpenStack Swift instance will need to have a well known API end point. In later OpenStack Swift versions, some swift implementation will have KeyStone authentication implemented instead of the Auth 1.0 as used by Rackspace Cloud Files. In the case of KeyStone, The well known end point will be a KeyStone API end point, and the swift object storage API will be delivered inside the authentication exchange as an item inside the service catalog. 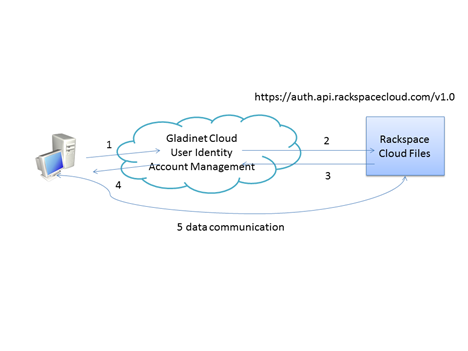 As documented above, Gladinet Cloud will be responsible for user account management and optionally connects to user identity systems such as Active Directory. The step 1,2, 3,4 will be the initial hand-shake to convert a user in the Gladinet system or an Active Directory system to a swift user for account management. The step 5 will be the data passage once the account exchange step is done.

How Gladinet Connects to Your Own Swift

The most important part is connect to your swift API end point. If your API end point is on SSL, you will need to make sure it is a good SSL (not a self-signed SSL) that can be recognized by a web browser.

What You will Get with Gladinet?

You will see Web Browser File Manager interface, the Desktop PC client, the Mac Client, the iOS and Android clients and the universal access to your OpenStack Swift Storage.

Go to www.gladinet.com and check out the Team Edition account. You can plug in your own OpenStack Swift account into Gladinet Cloud.