With the latest Gladinet iOS app update, The iOS app greatly increased the interaction between a cloud-bound file and applications native to the iOS device.

1. From iOS App, Open file In Other App 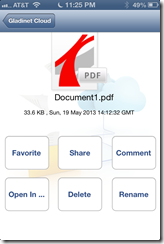 From the iOS App, you can use the disclosure button to click into the file details view. In the view, there is an “Open In …” button. When click on this button, the file will be downloaded and sent to locally installed application. In the picture, applications that are capable of opening PDF files will be presented to the user to open this document.

2. From Other App, send file back to Gladinet Cloud 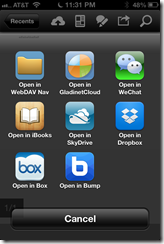 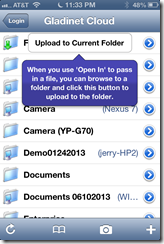 For the iOS applications that support WebDav protocol, you can also mount Gladinet Cloud account as Webdav, allowing those applications to work with the cloud-bound files directly.