Which Cloud Storage Do You Use?

We opened up an Internet poll last week about which cloud storage do you use. The poll will continue to be open for vote at Gladinet blog. The early results are interesting.

It is also possible that Amazon S3’s early start in 2006 contributed to the big lead. Windows Azure is introduced more recently in 2009-2010.

There are more cloud storage services launched this year or last year, such as AT&T Synaptic Storage, EMC Atmos Online, Peer1 CloudOne, Mezeo and etc. As time goes by, more and more people will know them but now looks like it is still early stage. Who has the big marketing dollars to spend? Who positions well in customer’s mind? I couldn’t wait to see what it will look like two more years down the road. 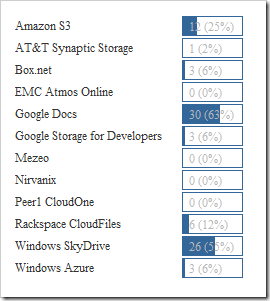 Visit Gladinet Blog to see the poll and take the vote!