Which Google User Are You?

If you have a Google Apps email account such as joesmith@mycompany-domain.com but use a Google personal account service such as Google Picasa, who are you then?

Our users have brought to our attention of a recent Google Apps change that attempts to grand unify the two sides together as one account. There isn’t much documentation on the Google web sites since it is still under the Trusted Tester program. All the documentation we found refers to the mysterious  “Transition”.  Now we are trying to piece together the “Transition” here.

History – The Two Were Born Differently

Regular Google personal account has be around longer than the Google Apps account, with more products and services to use.

Google Apps was introduced more recently than the personal account, with less products and services available.

There are two sets of isolated infrastructures, with different set of database for the user accounts.

Problem – Both are Great Services

Google personal account is great with all the services such as Blogger, Picasa, Reader and so on.

Google apps account is great in that you can setup a startup company in no time with email, document and site support, which used to require a Microsoft Exchange Server + a Microsoft Sharepoint Server.

It also created conflicts. When a Google personal user wants a Google Apps account, he has to suffer lost of services (no more Picasa!)

We first noticed the transition when user reports coming in, complaining that they can’t map a network drive to Google Apps account any more or they can’t upload documents to Google Apps directly from Windows Explorer any more, with the Gladinet Cloud Desktop.

As we investigate more, we found that Google Apps is transitioning into regular Google Account. It is a merger! 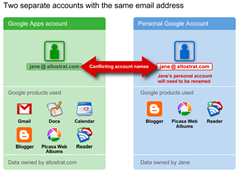 As quoted from another Google support page:

we have released a new update to the Gladinet Cloud Desktop, version 2.3.432. It has a “Converted Google Apps Account” option now. If your Google Apps account has been transitioned into the new Google Account, you can use this option to mount your Google Apps (Docs) account into Windows Explorer and continue to upload/download documents from the mapped virtual drive. 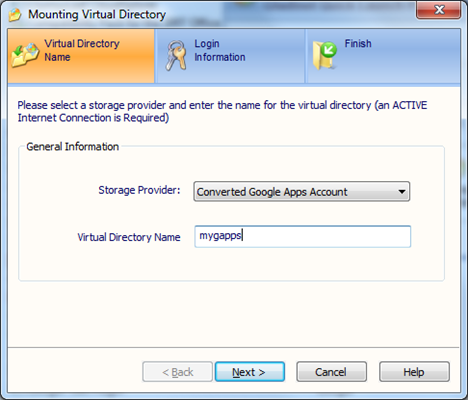